PokerStars and Oracle Red Bull Racing have doubled down on their recent partnership with a new fan rewards initiative. 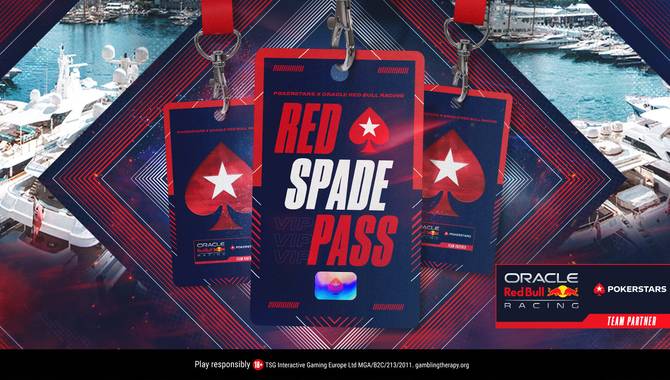 With the Formula One season underway, both parties have collaborated on a series of exclusive “Red Spade Passes” for racing fans.

These will be limited and offer PokerStars players an opportunity to win various rewards and experiences, all centred around F1.

PokerStars and Oracle Red Bull Racing announced their partnership earlier this year, which will see the former’s branding appear on the team’s car and race suits. Now, they’re looking to deepen this relationship by offering fans these passes.

Christian Horner, Oracle Red Bull Racing Team Principal and CEO, said: “It’s set to be an epic season and we are excited that through this partnership, the PokerStars community and beyond will be with us every step of the way.”

The first two passes will be awarded via poker tournaments taking place on 2 April at PokerStars. These will grant their winners a four-day trip for two to Nice and Monaco, where they will be able to watch the Monaco Grand Prix.

Further passes to Monaco will up for grabs across the PokerStars network in the coming weeks, it said.

Red Spade winners will also receive a personalised message from an Oracle Red Bull Racing name, as well as a poker coaching session with a PokerStars Ambassador or PokerStars Learn coach, among other rewards.

“The partnership with Oracle Red Bull Racing has entertainment at the heart of it, supporting our vision of giving our community epic moments they’ll never forget,” added PokerStars Group Marketing Director Tom Warren.

“We’ve got even more rewards to come so stay tuned for more exciting news. It’s going to be a memorable season for our community on and off the track.”