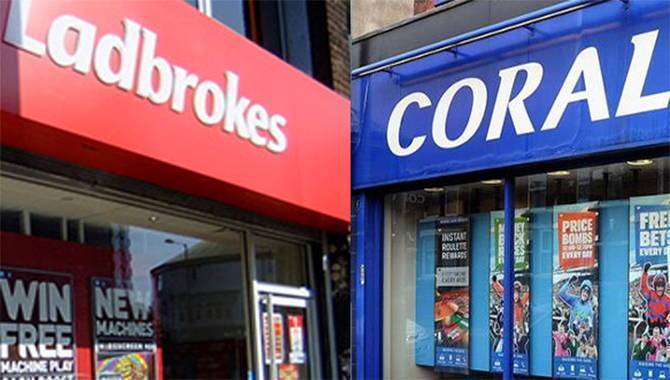 By David Cook
Paddy Power Betfair has now had a half year in operation since the two operators completed their merger in February, and there were a number of positive results in its H1 report covering the six months ended 30 June.

Increases in revenue (18%) to £759m and underlying operating profit (39%) to £148m year-on-year were only offset slightly by the reporting of an operating loss after merger-related items of £48m.

Though it has had a head-start of sorts, with Ladbrokes and Gala Coral expecting to complete their merger in the autumn, pending the sale of 350 to 400 shops, Paddy Power Betfair will be facing a strong competitor in the UK market.

It will perhaps be easier to see which merged entity is outperforming the other when Ladbrokes Coral eventually forms and tackles the restructuring hurdles that such substantial M & A deals face, but we can at least take a look at where the operators are for the time being when combining Ladbrokes and Gala Coral’s figures separately.

Gala Coral’s reporting cycles work slightly differently to Ladbrokes and Paddy Power Betfair (where both report on a calendar-year basis), but it did publish a half-year report for the 28 weeks ended 9 April 2016.

Ladbrokes’ figures are headline as opposed to statutory and the increases/decreases are year-on-year.

The two entities are difficult to compare in the sense that Paddy Power Betfair is far more reliant on online net revenue than Ladbrokes Coral, due to the fact that Betfair does not operate a retail division.

What seems clear is that both merged groups, formed yet or not, appear to be on the right path, and while Ladbrokes Coral would be outperforming Paddy Power Betfair in overall net revenue and EBITDA, the issue of how this consolidation helps beat the 15% tax on online profits, brought in back in December 2014 and which arguably led to the M & A we are seeing in the market, could be the true definition of the stronger merger.

If Paddy Power Betfair is more reliant on online net revenue, then the online tax is more difficult to deal with, but then the increase in machine gaming duty, from 20% to 25%, implemented in March 2015, is likely to have a stronger impact on Ladbrokes Coral.
RELATED TAGS: Online | Land-Based | Mergers & Acquisitions | Financial
DISCUSS THIS ARTICLE