Play’n Go Manager: Talent is a much bigger issue than people think

When addressing the importance of "brand" in gambling, the natural tendency is to focus on consumers. 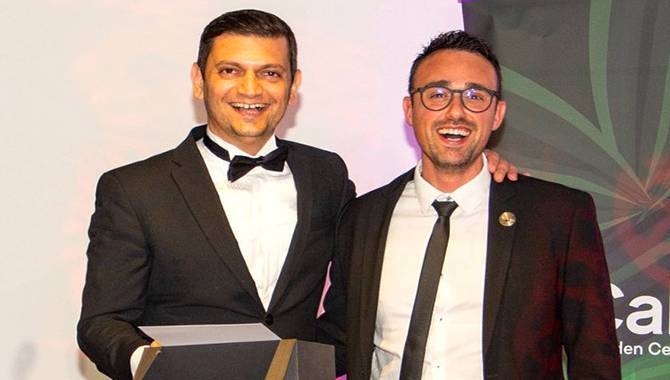 Few would immediately consider the value of an "employer brand." But that’s what Play'n Go's Thomas Mahoney (to the right in the picture) is aiming to change.

According to Mahoney, there is a little too much focus on boat parties within the gaming sector, as opposed to genuine employer branding. Three months ago, he was appointed Play’n Go’s Communications Manager and has since received an industry award recognising his long-term work.

Speaking exclusively to Gambling Insider about the concept of employer brand, Mahoney discusses what he has been trying to instil throughout gaming, not just at Play’n Go.

What does your day-to-day role involve at Play’n Go?

I came on board three months ago and my role here is managing external communications. Additionally, I’m involved in marketing, the channels we’re using for communications and a whole list of tasks I don’t even know where to start with. I’ve been working in marketing within the gambling industry for a good decade.

I recently received a personal award for work in this area. I appreciate the fact what I've been trying to do has been recognised. I haven’t been trying to push one particular brand; I’ve instead been trying to educate people about how employer branding can change their work lives. It wasn’t easy in the first three or four years; people questioned why you needed to turn up with stands to big trade shows for these kinds of things. But, by my very rough estimation, about $30-40m is now being spent annually on this concept alone in Malta. I do this because of my passion for it and I keep working to achieve what I haven’t achieved yet.

At Play’n Go, we’re looking at PR, events and getting our brand out there more. Most companies get into competition over the little details which won’t help. It’s like building a house and giving it a lick of paint. Companies fight over who has the best paint but not the framework or internal basis of the house.

How would you describe your time with the company so far?

I can count real genuine employer brands in the industry on one hand. Play’n Go is one of them, from a culture perspective, a people perspective and a benefits perspective. It all ties in with the user journey of an employee or prospective employee. It’s useless trying to sell a beautiful company which has an amazing façade where everything is broken to bits once you join.

Play’n Go rates really well; it’s all about enhancing and stimulating work methods through the environment we work in. So it’s like being in a five-star hotel: living rooms, rooms overlooking the sea, amazing views, a cafeteria which is always open and several group working areas.

It’s interesting you’ve used the phrase "user journey" in reference to employees, as mostly this would be associated purely with consumers.

That’s very true. I’ve previously given talks on what user journeys mean in this case. The way I’ve been trying to shape this concept of employer branding is having retention and acquisition as the model for the whole company. It’s more important to retain who you have, prior to acquiring new talent. That’s where everything could go down the drain.

The one key formula is: you need to externally mirror precisely the culture going on internally. Any false promises and it’s all lost. In a chain of 30 loops, you can fake the first few loops but when it becomes apparent the backend of the company does not match the frontend, there will be so much damage done. This damage is caused through word of mouth, social media, forums and places like Glassdoor.

It sounds like you’ll be implementing a lot of change. Was there anything you initially saw at Play’n Go which impressed you, or is it a case of introducing very different ideas?

Play’n Go does things really well but my role is to take all the knowledge I have to help them make it better. We will be using an educational approach; this concept has the potential to enhance lives, jobs and cultures. Rather than "this is who we are, these are our boat parties," it’s all about focusing on what a company truly has. There’s a classic post going around LinkedIn where a hypothetical CFO says "what if we train these employees and they leave?" The CEO replies "what if we don’t train them and they stay?" Charity starts at home.

What are the biggest challenges for the industry in this particular area?

Globalisation of such projects is always very hard. You have different cultures, religions and distance between different territories, geographically and politically. This process takes time yet this is a very agile industry; now, concept to execution is very quick. Gone are the days where this takes a year – it could be less a month depending on your team and strategy. Talent is always a challenge, too. As soon as you find talent and promote it, people can leave. For some organisations, poaching people is the best they can do so you are always vulnerable.

Throughout my time in the industry, there were only a few occasions when operators did not find a plan B for legal and regulatory issues and challenges. On the other hand, companies have had issues finding the right talent to drive them forward due to the shortage of available European talent pools. Said companies could not even get to the point of worrying about compliance. Many adjusted their organisational structure heavily, while some huge tech teams were lost to non-EU countries. The bottom line is talent is a much bigger issue than people think. No talent means no business.

On the topic of talent leaving organisations, Gambling Insider previously looked into the issue and found it is particularly prevalent within Malta (where Mahoney is based).

Just to give you a bit of background, online gaming companies will always get the best talent in Malta. The second-highest paid sector in Malta is the IT industry. Above that by a 25-40% increase in wages is online gaming, so there is no comparison.

It’s more exciting, there’s more perks, the people are trendier and there’s flexitime etc. Nevertheless, people here know there is an incredibly high demand which outweighs supply. So, of course, around 12-15,000 employees in Malta know they have a bit of a bargaining power chip.

Rather than seeing how they could move up the ladder, improve their performance by a mile or introduce a new concept within the company, employees can join Mr X or Mr Y down the road. There are about 1,500-2,500 jobs which cannot yet be filled within the industry.

Bearing in mind the challenges you’ve discussed and the agile nature of the industry, what would you pinpoint as the ultimate outcome of your project with Play’n Go?

The ultimate outcome would be to become an employer of choice. We are already at this level but Play’n Go is transitioning to the stage of becoming a big player in the market. Some people have a centimetre and shout about a metre; Play’n Go is a company with 10 metres which shouts about one centimetre. We’re in the process of changing this and that’s why our marketing team has grown drastically on this side of things.

Secondly, we want to attract the best talent. When people know you have a genuine product, genuine talent knocks on your door. Thirdly, we are producing 40+ games this year, which is a record-breaking year for a company of this stature, and we need manpower to promote this work and become part of the whole organisation.

We are one global organisation, which is very important. The way I like to explain it is, rather than having a tower with five offices on different floors, our tower has five floors in different countries.