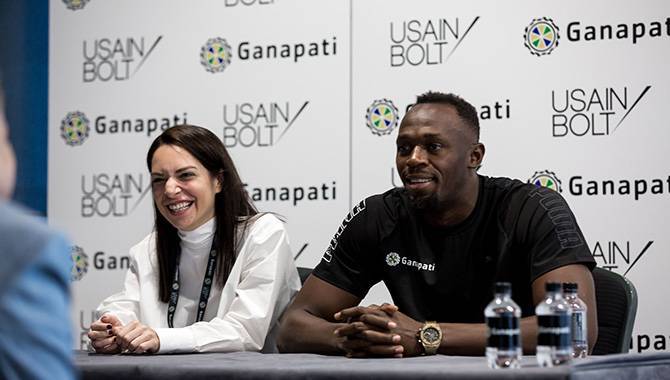 He was the face of global athletics for so long. Now Usain Bolt is the face of his own online slot game, courtesy of Japanese games provider Ganapati.

Everyone remembers where they were the first time Bolt won the first of his 100m Olympic gold medals, just as they do every time he broke the 100m and 200m world record thereafter.

Thanks to Bolt’s involvement with gaming however, everyone at ICE London 2020 will now remember exactly where they were when the Jamaican graced the gaming trade show with his presence in February, even performing his own set as a DJ.

On the Wednesday afternoon of ICE week, Bolt met with assembled members of the media and, for Trafficology, this was not an opportunity to be missed. We’ve had CEOs, affiliates, account managers, Champions League-winning footballers and more featuring in Play Hard over the years. Now, we have the fastest man in history.

For our first question, we asked Bolt how it feels to have his own online slot game as, after all, it’s not something that happens every day – even for a man of his stature. An "excited" Bolt spoke of his desire to broaden his brand and described how gaming has been a part of his nature all his life.

But how did the beginning of this partnership compare with his first few days working with other companies and in other industries? "For me, it always starts out the same," Bolt told Trafficology at a gathering of reporters in a Ganapati media room. "You get in contact and try and build a relationship with a big brand. You try to help them as much as they help you. You do your research and want to work with people who are on the same timeline, work at the same level and have the same goals as you do. I'm excited to do a lot more things with Ganapati in the years to come."

As regular Play Hard readers may guess though, here was when we broke away from any business or industry-related questions. It was high time to get to the serious topics…

I’ve been having a debate with my coach about this! I was saying 10.3 seconds but he said 10.7 seconds. For me, 10.7 seconds is really bad. I’ve been retired for over two and a half years but I miss competition.

The full Usain Bolt - Play Hard feature will appear in the April edition of Trafficology magazine. Click here to read the current issue.