Markeloff vs S1mple: NAVI and 1xBet are about to bring us the clash of Counter-Strike titans! 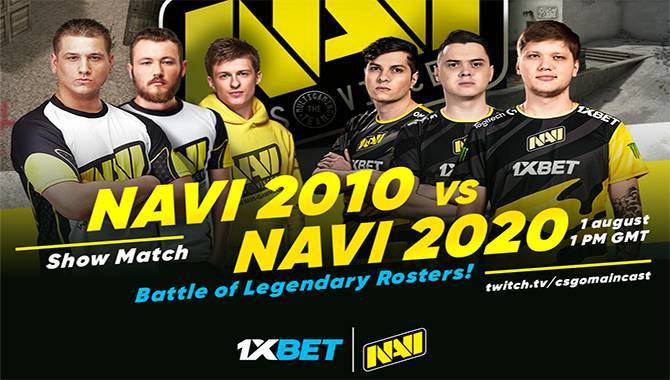 NatusVincere is one of the oldest, most renowned and consistently successful esportsorganizations.Throughout the last decade its players have come a long way - from practicing in small net cafes to winning multiple titles on the world stage. Its legacy began with the legendary CS 1.6 lineup, starring Markeloff, Ceh9 and others. Now, the phenomenon continues with fans going crazy over some NAVI players of CS:GO.

For years fans have been debating which era had a stronger roster, so NAVI, alongside its partner 1хBet, decided to stop these disputes once and for all…by bringing you the ultimate clash of both legendary lineups! Will these CS hotshots of different generations play as equals? Who will claim the victory — the pioneers of competitive gaming, who made themselves into undisputed CS icons, or the young talents, hardened by the meat grinder of constant tournaments where even newcomers can punish top-tier players for the slightest mistake?

Old school vs new school, boomers vs zoomers, NAVI 2010 vs NAVI 2020 — this is the ultimate esports showdown of this summer!

It all began on a live stream of Arsenii Ceh9 Trynozhenko, a former CS 1.6 star of NaVi, who was later joined by the captain of the current NaViCS:GO team, Kirill Boombl4 Mikhailov. Fans saw this as an opportunity for old and new NAVI players to test their in-game prowess in a full-fledged showdown, and 1xBet helped to bring this long-awaited spectacle to life.

The match is set to take place on August 1st. And since NAVI has fans all over the world, this cross-generation battle will be broadcast in both Russian and English languages by Maincast studio on their corresponding channels.

In addition, 1xBet has prepared a couple of extra surprises for the most dedicated NatusVincere fans. More details will be announced soon.

1xBet (est. 2007) is one of the most rapidly growing betting brands in the world. The company offers over 2000 markets across 25 esports titles, including Dota 2, CS:GO, LoL and other games.

1xBet is the title sponsor of several esports organizations, such as NAVI, Cascade Esports and HellRaisersEsports.

Maincast is one of the most recognisedesports production companies in Europe, creating content and operating live tournament broadcasts of Dota 2, Counter-Strike: Global Offensive, FIFA, Overwatch and other competitive video games. Maincast is an official ESL partner in Eastern Europe and holds exclusive broadcasting rights of over 70% of premium Dota 2 and CS:GO events.