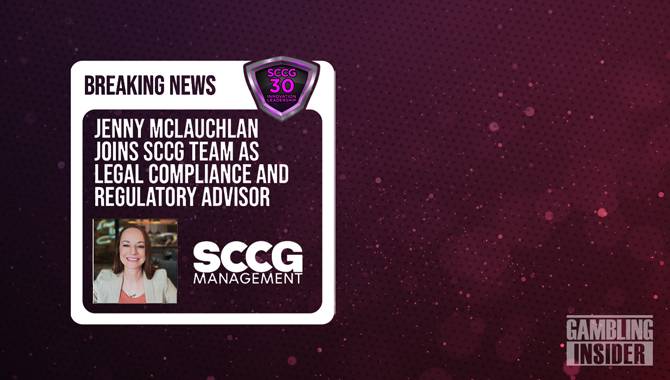 SCCG Management has welcomed Jenny McLauchlan to its Las Vegas office, where she will serve as Legal Compliance and Regulatory Advisor.

In this role, the legal expert will help SCCG clients looking to enter new markets acquire the appropriate gaming licences and meet all regulatory requirements. In this regard, her employer said McLauchlan’s “legal mind and attention to detail” will serve her well.

She originally qualified as a lawyer in England back in 2010, and was recruited by Manchester-based solicitors Pannone LLP, which was taken over by Australian law firm Slater & Gordon in 2014.

In 2015, McLauchlan moved to Dublin, where she worked as a consultant for Augustus Cullen Law, before moving back to England three years later. After her return, she became a lecturer-in-law at the University of Law.

Her move to Las Vegas came in 2020, where McLauchlan currently resides with her family. Alongside her new role at SCCG, she also serves on the Board of Directors for a local non-profit group centred around child development.

“Jenny assists SCCG Management clients to obtain appropriate gaming licences,” remarked SCCG. “Her legal mind and attention to detail serve her well when navigating the different statutes, rules and regulations relating to gaming and fantasy sports across the various states.”

In other SCCG appointment news, the company named Matt Di Giorgio its new Director of Talent Recruitment earlier this month. And in late April, SCCG added Pariekshit Maadishetti to its leadership team in India.

SCCG Management is helmed by Founder and CEO Stephen Crystal, and has offices in Las Vegas, Calgary and London, among other cities.