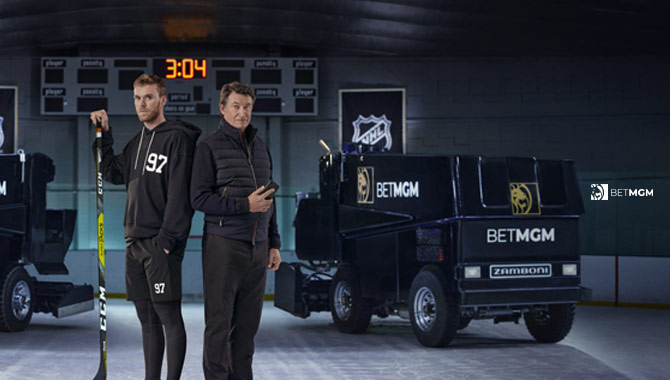 The 30-second spot, described by BetMGM as “tongue in cheek,” sees Gretzky stop by during McDavid’s practice session. Gretzky gets excited while checking the BetMGM app, which distracts McDavid, to his annoyance.

“It’s incredible to showcase two of the greatest hockey players on-screen interacting with one another,” said Raymond Doyle, VP of Brand at BetMGM.

“We look forward to entertaining hockey fans during commercial breaks as two of the game’s legends blend sports and entertainment and demonstrate the endless possibilities with BetMGM.”

The company is no stranger to creative ad campaigns. In fact, this latest spot is part of a broader marketing initiative entitled “It’s On.”

Launched in September, this ongoing campaign will leverage BetMGM’s brand ambassador line up, which includes celebrities such as Jamie Foxx and Vanessa Hudgens, as well as sporting icons like Kevin Garnett.

The campaign will be delivered as an episodic series going forward. Its first installment hit TV screens on 8 September and saw Foxx wander around a Bellagio suite meeting various BetMGM ambassadors.

Gretzky, meanwhile, became a brand ambassador for BetMGM in June 2021 and McDavid signed on in March of this year. The new ad will appear across broadcast, outdoor marketing, digital and social channels.

Creative agency 72andSunny New York is responsible for the campaign’s conception while Peter Berg, who has previously served as executive producer on shows such as HBO’s Entourage and Ballers, directed the recent spot.