Betting brand Coral has organised a 3D horseracing display in London’s Piccadilly Circus ahead of this year’s Cheltenham Festival, and in doing so, has become Britain’s first bookmaker to use such technology. 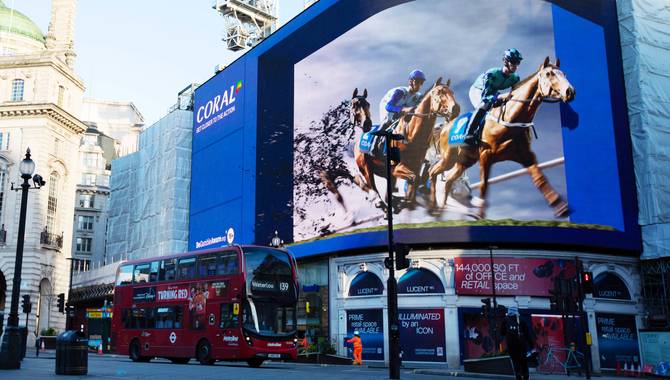 The riders and their mounts eventually fade away, leaving one horse which then leaps out of the screen in slow motion. The display debuted this morning and will appear on rotation once every hour for one week, throughout the Cheltenham Festival.

Chris Brocklehurst, Coral’s Head of Brand Marketing, commented: “Never before has horseracing been given this sort of treatment, and this show-stopping spectacle truly brings racing fans closer to the action.

“It’s based on the premise that when it comes to racing, the only horse that matters is the one you’ve backed. We’re proud to be the first betting brand to use this 3D poster technology and to showcase horseracing like never before.”

Content from Coral’s campaign will also be visible at further locations throughout the UK, including Liverpool, Manchester, Birmingham, Nottingham and Southampton.

“The7stars have worked with Coral to carefully develop an impactful and innovative media campaign that utilises a range of media channels to bring audiences closer to the action,” said Lewis Watson, Client Lead from the7stars.

“Coral has a firm commitment to creativity that is perfectly illustrated by the Piccadilly Lights activation, becoming the first bookmaker to utilise Ocean’s DeepScreen 3D templates.”