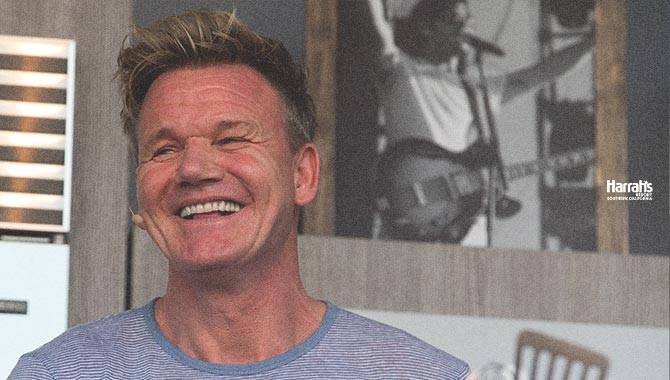 The British chef and television personality opened his first restaurant under the Hell’s Kitchen name at Caesars Palace in Las Vegas.

As a result, this latest location represents Ramsay’s third Hell’s Kitchen at a casino-resort and first in California.

Harrah’s Resort SoCal is owned by the Rincon Band of Luiseño Indians and operated by Caesars Entertainment. It is located between San Diego and Los Angeles, in a mountain valley along the San Luis Rey River.

The new restaurant, meanwhile, occupies an over 11,000-square-foot space that can accommodate up to 332 guests.

“I love Southern California,” said Ramsay. “It’s one of the best places to live, as well as visit, so it was a no brainer to bring California’s first Hell’s Kitchen to Harrah’s Resort SoCal.”

Menu items include Ramsay’s signature dishes, such as beef Wellington and sticky toffee pudding, alongside other specialty items such as lobster risotto, Wagyu meatballs and pan-seared scallops.

Harrah’s also teased future additions to its menu, commenting that diners “can expect to see new and progressive dishes specific to the Harrah’s Resort SoCal location in the coming months.”

Restaurant General Manager Sarah Ertmann said: “It is an honour to open the first Gordon Ramsay Hell’s Kitchen in the state.

“This addition to Harrah’s Resort SoCal only furthers our mission to provide guests with unforgettable experiences and Gordon Ramsay Hell’s Kitchen embodies just that.”