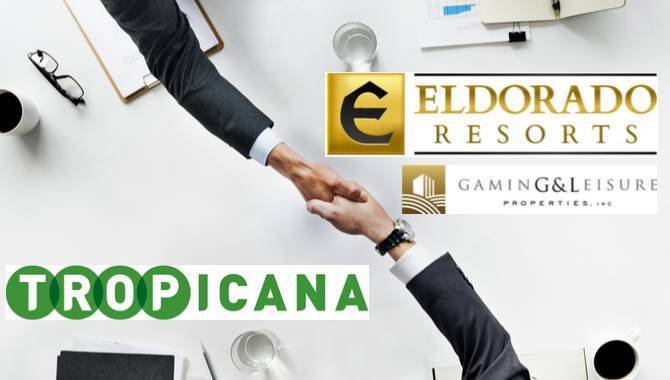 Eldorado Resorts, Inc. has announced that an agreement has been reached to acquire Tropicana Entertainment Inc. in a $1.85bn cash transaction deal, as reported on the company’s official website.

The announcement came moments after another press release revealed that the company would also be purchasing the Grand Victoria Casino for $327.5 million, bringing the company’s total acquisition costs to over $2.2bn.

The financials of the Tropicana transaction will see Gaming and Leisure Properties, Inc (GLPI) pay $1.21 billion, excluding taxes and expenses, for all of Tropicana’s real estate. GLPI will then enter into a master lease with Eldorado, who will fund the remaining $640m of the cash consideration, reaching the total of $1.85bn.

GLPI is also expected to acquire Tropicana’s real estate portfolio which includes eight casinos, excluding the MontBleu Casino and the Tropicana Aruba Resort and Casino, which are to be disposed of by Tropicana prior to closing.

The deal will allow Eldorado to enter into a triple net master lease for the acquired properties for an initial period of 15 years, with the option to renew it for up to 20 years. The approximate cost of the initial annual rent under the terms of the lease is $110m.

Commenting on the Tropicana acquisition, Gary Carano, Chairman and CEO of Eldorado, said: “With our proposed acquisition of Tropicana Entertainment, Eldorado Resorts is yet again pursuing a large transaction that is expected to be accretive, further increase the scale of our regional gaming platform and drive free cash flow growth."

Eldorado also disclosed that it will be paying for the $640m transaction, as well as the repayment of Tropicana’s outstanding debt, with cash generated from its own operations, pending asset sales (Presque Isle Downs & Casino $178.9m, Lady Luck Casino $50.6m both to Churchill Downs) and cash flow from Tropicana operations through closing.

Eldorado will also be receiving $600m of committed debt financing from J.P. Morgan.

Carano added: “The acquisition of seven Tropicana Entertainment properties will allow Eldorado to enter two new gaming jurisdictions and deliver additional financial and geographic diversity to our operating base. We have identified $40 million of synergies that we expect to realize in the first year of our ownership.”

The transaction is expected to be completed by the end of 2018. It has already been approved by the board of directors at Eldorado, GLPI and Tropicana. The deal must now wait for confirmation that it abides by the required regulatory approvals and ‘other customary closing conditions’.

Eldorado also announced the definitive agreement to acquire the Grand Victoria Casino in Elgin, Illinois, owned and operated jointly by A Hyatt subsidiary and MGM Resorts International, for $327.5 million. The transaction will be funded by the same means and will require the same approval to be finalised.