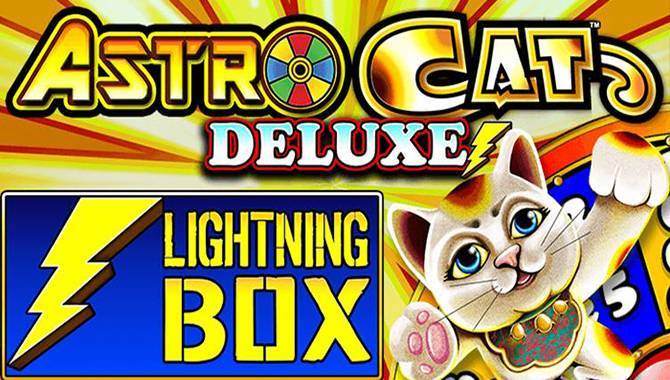 The game’s Asian-themed, 5-reel, 1296 ways forerunner Astro Cat has been a major hit in U.S. land-based casinos, as well as attracting an army of fans after going online in Europe.

It was boosted by Incredible Technologies’ patented Sky Wheel® feature creating Astro Cat Deluxe and attracted further success on the casino floor over the past 18 months.

The exciting feature is triggered when 5 Sky Wheel symbols appear within the ReelFecta reel, setting the giant wheel above them spinning. Players can then win a Jackpot, entry into the Astro Cat Bonus, or a credit prize.

Any credit prize is accompanied by a secondary spin of a small inner wheel for the opportunity to win a credit multiplier up to 5x, or a respin of the giant Sky Wheel.

Peter Causley, Lightning Box’s Managing Director and Co-Founder, said the collaboration would further solidify Lightning Box’s commitment to a true multi-channel offering, as they look to bring the best gaming ideas online from other verticals and geographical markets.

He added: “We’re really pleased to have teamed-up with Incredible Technologies for Astro Cat Deluxe, which is an exciting fusion of slot IP.

“The original game has been a real hit across the board and the Deluxe version has shown some stellar performance in the USA since its launch late 2017. We’re confident that the online release will also deliver similar success for our online operating partners.”

Dan Schrementi, VP of Gaming Sales and Marketing at Incredible Technologies, said: “The original Astro Cat is a proven performer and a staple in our catalogue of games.  The addition of the extremely popular Sky Wheel feature puts Astro Cat Deluxe in a new spotlight and we’re excited to see it offered across land-based and online gaming channels.”