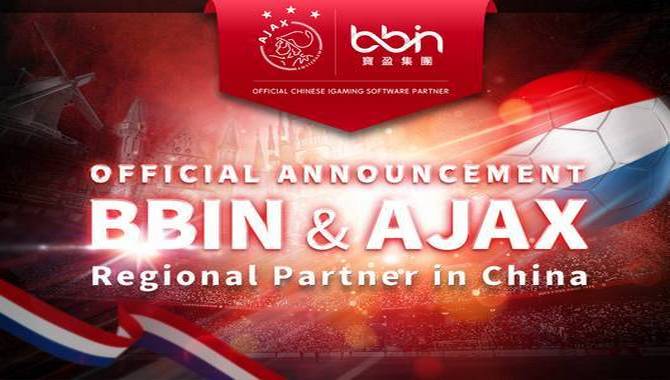 As the leading iGaming software supplier in Asia, BBIN sponsored Formula Championship Series since 2015 and made the way to football in 2018 by the Bundesliga. BBIN is keeping up this momentum in 2019.

Recently, it is officially announced that BBIN becomes the “Official Chinese iGaming Software Partner” of Ajax, well-known as "cultivator of football stars”. Most remarkably, their excellent performance in the 2018/19 UEFA Champions League made a deep impression on the world.

Ajax was considered as a dark horse of the 2018/19 UEFA Champions League. In the round of 16, they beat Real Madrid who was the reign champions, who has won 4 championships in the recent 5 years. In the quarterfinal, Ajax defeated Juventus Cristiano Ronaldo led, and went into the semi-finals. The key to Ajax’s rise is attributed to the team's unique football strategy. Ajax’s long-term persists in offering more opportunities to junior players continuously brings fresh blood to the whole team during the match.

BBIN is committed to developing iGaming software and enhancing the platform integration service to satisfy users’ various requirements. For now, the platform has already gathered famous partners from all around the world to enrich game diversity and enhance user experience.

Furthermore, BBIN has received the recognition by several nominations and titles of major international awards which proves the BBIN’s big influence and good reputation in the iGaming industry. Meanwhile, BBIN has dedicated much time to charity over the years. In the name of TGB Charity, the company invited a well-known DJ to collaborate on an online event that led to a million of music downloads. This year, BBIN also called upon the world to support "For The Next," a green tree-planting event.

Hence, BBIN is willing to innovate and enrich new ways of cooperation with global partners, like Ajax. With the collaboration, BBIN hopes to create the good communication atmosphere and obtain win-win in the future.

BBIN and Ajax will enjoy all excellent moments together in the following year. Hope Ajax will gain great result and success this season.